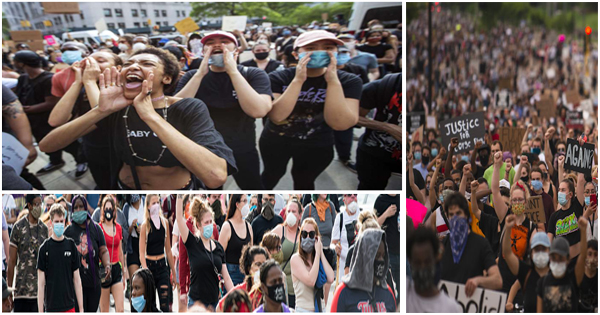 George Flyod: Thousands of black and white people march together for justice and living together.

When you’re black in the world, you’re 20 times more likely to be stopped by the police. You have to deal with racism and precarious employment and housing throughout your life. We are often victims of prejudice and we have to fight 10 times more than others to be accepted. Because of the colour of your skin, you often face racist discrimination and harassment. Prejudices, racist insults, monkey calls, stereotypes, lack of representation on TV or in the media, every person of colour knows what it feels like to feel misunderstood and rejected just because you are different from others. Many of us wonder in our hearts:

‘Is it wrong to be black in this world? ‘What have we done to deserve all this? And it is in this complexity that living together becomes difficult. Because we feel rejected.

In the United States, many people of colour do not feel safe. They’re scared all the time. They understand very quickly that black people do not have the same rights as other people because of the color of their skin. Injustice is omnipresent. Movements such as Black Lives Matter highlight the inequalities and denounce the abuses that black people suffer on a daily basis. And they are tired and exhausted from being constantly stigmatized.

The awakening of consciousness.

George Flyod’s tragic death was an electric shock to thousands of people around the world. It awakened consciences and brought to light a dark reality in our history, where depending on the colour of a person’s skin, justice is not the same.

The video of Flyod’s death is difficult to watch. You can sense his grief and despair. We can’t understand why Officer Chauvin knelt on that poor man’s neck? How could he remain so cold and stoic in the face of George’s pleas to spare his life.

“I can’t breathe! », those were the victim’s last words.We all know that this man, and others before him, should never have died. These racist crimes robbed these poor people of their dreams, their futures and their hopes. And why all this? Why did they die?

They lost their lives unjustly because some people are afraid of differences. Racist people forget that every life is important on earth. And that God created every man in his own image. So why does racism still exist in 2020? Why can’t living together overcome racial hatred?

Being a person of different colour, origin, religion or nationality is not easy in the world. You are constantly being unfairly discriminated against, mocked and faced with racism. And it’s not fair. We often talk about equal opportunities, diversity, black and white, butter. But the reality is not always rosy.

Marches of hope for more justice and tolerance regardless of the colour of one’s skin.

But in all this darkness, we are touched when we see people of different colours (white, black, yellow, red) and origins marching together in unison to demand more justice and fight against police violence.

I give thanks to God when I see Martin Luther King’s dream come true during his peaceful multicultural protests around the world.

In the United States, London, Berlin and other countries, wonderful caring people are marching for more justice and fairness. They put aside their differences for a nobler cause and bear witness that the only race that exists is the human race.

Thousands of people around the world walk the point, others kneel on the ground, others sing or gather in tribute to George Flyod and all the innocent victims of racial hatred. With placards marked, “I can’t breathe”, “No justice, no peace”, they organize marches to “live it together” in many cities. And they shout loud and clear that every life counts.

Will this massive peaceful protest on the Stone Arch Bridge in Minneapolis today be shown on US corporate media?#JusticeForGeorgeFloyd pic.twitter.com/1AVKFGTtT9

Will this massive peaceful protest on the Stone Arch Bridge in Minneapolis today be shown on US corporate media?#JusticeForGeorgeFloyd pic.twitter.com/1AVKFGTtT9

pic.twitter.com/DW8vtX4kD5 this is insane, something powerful. Media needs to show this! This is the power of the protest, it leaves an impact in All of us. #BlackLivesMatter

Will the US media show us these huge peaceful protests? pic.twitter.com/qvzbKaAyiP

Protesters chanted: “WALK WITH US!!”

So the sheriff and his men joined the protest.#GeorgeFloydProtests pic.twitter.com/vJzUFH0Tb7

EVERYONE MUST SEE THIS

Black men protecting an officer during the #GeorgeFloydProtests / Riot

The mainstream media will not show this kind of unity so please RT pic.twitter.com/OKR3HQFQDf

George Floyd should still be alive right now. But he was lynched.

We will not stay quiet. No justice, no peace.

This video was sent in by a peaceful protestor in Minneapolis today. pic.twitter.com/JR0Ca3TFyh

Photos: American police officers on their knees, as Flyod protests flare out of control

first US, then Japan, and now London. the protests are now happening all over the world and people are finally becoming aware & have no fear in speaking up for what is right. the change? it’s about to happen. just wait. #BLACK_LIVES_MATTERSpic.twitter.com/0L2TuBdx0q

Support for the U.S. protests against racism and police violence is spreading abroad.

One can only hope that the message is heard. And that racist people understand, that we are one. And that we must stop rejecting others because they are different. We don’t have the same number of hairs, the same intelligence, the same body, every human being on earth was born different. And that’s what makes us both beautiful and special. May God bless each and every one of you and may they bring us more tolerance, kindness and wisdom.