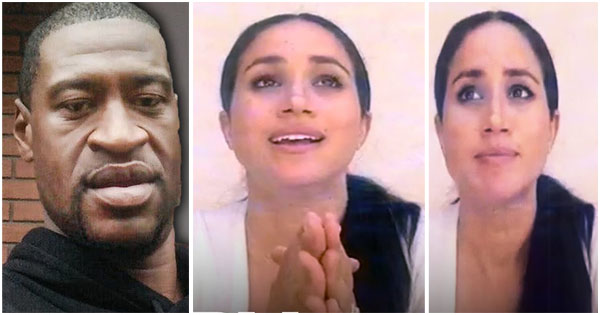 On June 4, 2020, the Duchess of Sussex delivered a powerful, committed speech on the death of George Flyod.

Born to an African-American mother and a white father, the 38-year-old actress was the victim of racism when she lived in the United Kingdom. But she was also a silent witness to the victims and discrimination that her grandfather and mother experienced.

In a video posted by the magazine “Essence”, she denounces racism and at the same time supports the “Black Lives Matter” movement.

HER speech was addressed to new graduates from his former Immaculate Heart High School in Los Angeles. After congratulating them, she shared her sadness about the racism and the death of George Floyd. She also shared a personal testimony of her experiences in the United States.

She explained that it took a long time to express on the subject because she was nervous. She was afraid of not saying the right words and that these words would be misinterpreted.

“I realized that the only bad thing was to say nothing,” said the actress.

She quoted a symbolic phrase that her teacher said to her when she was 15:

“Always put the needs of others before your own fears. “

Brilliant & powerful speech by Meghan Markle. I love how raw & open she is about her speech being picked apart but put others before her fear. My respect for Duchess of Sussex has gone up another notch #BlackLivesMatter https://t.co/6Ik0UGn5kx

“As Immaculate Heart High School, graduating class of 2020. For the past couple weeks, I’ve been planning on saying a few words to you for your graduation. And as we’ve all seen over the last week, what is happening in our country and in our state and in our hometown of LA, has been absolutely devastating. And I wasn’t sure what I could say to you.

And I was thinking about this moment when I was a sophomore in high school. I was 15. And as you know, sophomore year is the year that we do volunteer work, which is a prerequisite for graduating. And I remember my teacher at the time, one of my teachers, Miss Pollia, said to me before I was leaving for day volunteering, ‘Always remember to put others’ needs above your own fears.’ And that has stuck with me through my entire life and I’ve thought about it more in the last week than ever before.

So the first thing I want to say to you is that I’m sorry. I’m so sorry that you have to grow up in a world where this is still present. I was 11 or 12 years old when I was just about to start Immaculate Heart middle school in the fall, and it was the LA riots, which was also triggered by a senseless act of racism.

And I remember pulling up to the house and seeing the tree that had always been there, completely charred. And those memories don’t go away.

And I can’t imagine that 17 or 18 years old, which is how old you are now, that you would have to have a different version of that same type of experience.

But I also know that there’s a way for us to reframe this for you, and to not see this as the end of something, but instead to see this as the beginning of you harnessing all of the work, all the values, all the skills that you have, that you have embodied over the last four years, and now you channel that.

You are going to have empathy for those who don’t see the world through the same lens that you do, because with as diverse and vibrant and open minded as I know the teachings at Immaculate Heart are, I know you know that Black lives matter.

So I’m already excited for what you are going to do in the world. You are equipped, you are ready, we need you and you are prepared. I am so proud to call each of you a fellow alumni. And I’m so eager to see what you’re going to do. Please know that I am cheering you on all along the way. I am exceptionally proud of you and I’m wishing you a huge congratulations on today, the start of all the impact you’re going to make in the world as the leaders that we all so deeply crave.

Congratulations ladies, and thank you in advance.”

The actress from the series Suits spoke of the riots of 1992, when the black motorist Rodney King was hit by racist police. The culprits were acquitted and this led to riots in Los Angeles

“I remember the curfew, rushing home and seeing ashes on the way in the car falling from the sky, smelling smoke and seeing smoke coming from buildings,” reports she.

Meghan Markle in 2012 speaking out against racism

Her family members have been victims of racism.

In the past, she spoke of the discrimination suffered by her grandfather who had to use the door reserved for “people of color” to order from a Kentucky restaurant, where he could not sit down to eat his meal. “This story still haunts me (…) It reminds me of how young our country is. All the way we have come and what remains to be done, ”she wrote.

Meghan Markle also spoke in an old 2012 video about the racist insults that her mother had in Los Angeles while in the car with her.

The Duchess of Sussex has always fought to change the world by campaigning for noble causes. With her husband Prince Harry, they help many associations and are forces of incredible change.