USA: George Floyd, a black man, died after a policeman knelt on his neck 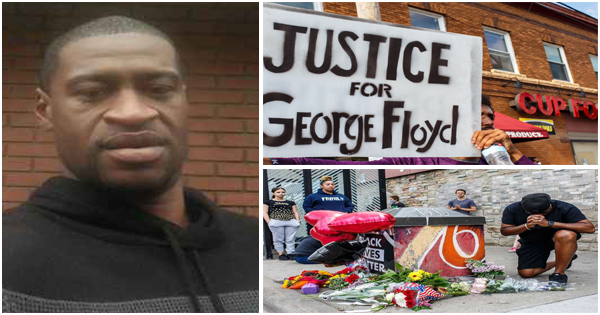 USA: George Floyd, a black man, died after a policeman knelt on his neck

What’s happening in the United States? Why so much hatred in this world? It’s 2020, in the midst of the coronavirus, and we wonder when racism will ever stop. After the sad story of Eric Garner, an African-American who died after being asphyxiated by white policemen in New York on July 17, 2014. Despite this, the police have still not learned the lessons of the past. And dark history has repeated itself once again. The case was so shocking that it contributed to the emergence of the Black Lives Matter movement.

On Tuesday, May 26, 2020, an online video went viral on social networks. It shows the cold-blooded murder of a black man in his forties in front of numerous witnesses by a racist police officer. George Floyd is a man who ended up at the wrong time and in the wrong place. He was stopped by four white Minneapolis police officers. One of them pinned him to the ground and put his knee on his neck.

BREAKING: A video shows a Minneapolis police officer pinning down a black man by the neck with his knee for several minutes as the man screams: “I can’t breathe.”pic.twitter.com/V9K3IU36ap

Floyd was having trouble breathing. For long minutes, he begged the officer to remove his knee so he could recover.

But the policeman didn’t react. Numerous witnesses gathered around the scene and asked the officer to remove his knee. But nothing happens. When the ambulance arrives, his killer removes his foot. But it’s late, Floyd has stopped moving and seems unconscious.  He died a few hours later at Hennepin County Medical Center.

Wave of indignation, anger, passers-by, activists and associations are unanimous. This man should never have died. George Floyd’s family is appalled. They denounced this brutal arrest as “excessive and inhumane. ” and accused the police of racism.

The four Minneapolis police officers were fired after this inhumane act,” said Minneapolis Mayor Jacob Frey on Twitter. The police chief announced that an investigation would be launched by the federal police.

Afroculture.net extend our condolences to the family of George Flyod. May God do justice.