The unusual thing is that the generator of these four girls produces electricity through urine.

Youth, youth, it will never cease to amaze me by its free, innocent and creative spirit. Children should be encouraged to learn and go to school. If they can not afford to go to school, I strongly encourage parents to enroll them in the library and encourage them to read books (in the case of African and developing countries) . Because, knowledge is a weapon to make things evolve.
Despite poverty, African and developing countries must focus on youth. Inventive, curious, funny, this pure-hearted youth surprises us every day when they create inventions in order to help their surroundings or change their countries better. God nourishes men of intelligence, so if children aged 14 to 15 manage to change their dailies, then why not you. Take your courage, and put yourself to work. Nothing serves to cry, if the doors do not open to you, then create your own business with faith, perseverance, hard work and a lot of courage.
Duro-Aina Adebola, Akindele Abiola, Faleke Oluwatoyin and Bello Eniola are young schoolgirls between the ages of 14 and 15, who invented an electric generator that works thanks to peeing. They presented their inventions at the Maker Faire Africa show in Lagos, Nigeria. Yes, friends, human waste like pee can be turned into energy to create electricity. These natural biofuels are able to light a bulb, recharge a cell phone or why not roll a car (but in this case it would take a huge amount of pee).

Why did they decide to create this generator?

I read on the internet that five people had been killed by carbon monoxide emissions. It deeply shocked me that people die from poisoning by generators. And I wondered what we could do to stop the release of harmful gases into the environment. “

We have always been encouraged to come up with ideas to help solve human problems so one day we were in the House of our school; We thought about what could be done to solve this problem. We thought we could use to power the generator instead of using conventional fuel, something that can replace conventional fuels and that will release no odious substance like carbon monoxide in the environment; Something that will not be expensive for Nigerians. You know that when the issue of the removal of the fuel subsidy came, there was a rise in the prices of petroleum products. “

After the problem is detected, it passes to the solution by questioning itself. What material to choose? What liquid has hydrogen and is not expensive?
They continue:

We started with various materials. We looked at the water but we felt that the amount of tension it will take to break the water molecule is great and we wanted something small so that we could have a larger output. We decided to look at the waste because Nigerians always opted for something that they were not obliged to spend their money. So we began to look at different materials, one of which was urine. We were looking for something that is liquid, something that has hydrogen molecules in it. We have also observed that the amount of tension needed to break a molecule of urine is less than the amount needed to break the hydrogen molecule in the water. So we opted for urine because we have an increase in production. “

How does the generator of our adorable schoolgirls work?

They choose a generator based on conventional fuels, which burns more slowly than hydrogen gas. Then they decide to delay the generator. That is, the back timing was delayed by 11 degrees.
Elles regroupent le matériel :They use as materials:

Assembly of the material and preparation step by step. 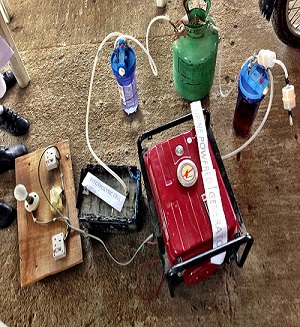 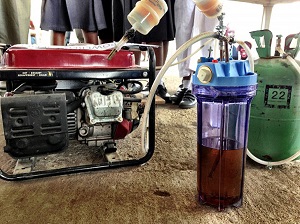 For information, the girls explain that a liter of urine allowed to produce 6 hours of electricity. Thanks to this system, they were able to supply electricity with bulbs, a fan and a television. They estimate the cost of the prototype to about 4,000 naira, not to mention the generator, which comes from the garbage.
Advantage: for this generator, the exhaust gas is just steam. This does not release carbon monoxide, as the normal fuel generator. Urine energy is free, non-toxic, available and renewable. For our 4 schoolgirls, the aim was to provide a clean environment for Nigerians.
Disadvantage: you must be very careful when handling hydrogen, because it is an explosive and flammable gas.
Call to Action
Adolescent girls retort:

We are calling on people to build on what we have done. They should take up the idea and help us improve it so that it can be something that can be used in all homes because it has not been done yet; It was designed to be used by Nigerians. All of us need support so that we can go as far as we can. We want a situation where every house can have it. We also want to make it more compact so you do not have to have different compartments, they can all be in a single unit that can just be attached to a generator. “

Viewpoint of scientists on pee as biofuel.
Many countries are looking for new renewable, accessible, non-polluting and abundant renewable energy solutions. The energy of biomass makes it possible to transform human or animal waste, plants or others into biofuel. With advanced studies, they can be an interesting alternative to oil.
In this case, the biofuel in pee can be used for the purpose of:

British researchers at the Bristol Robotics Lab explain that:

Enough to fuel millions of carburettors ecologically. These researchers focus their research on urea, which is an organic compound present in the urine of humans. Today, urea is manufactured industrially from ammonia and carbon dioxide. Urine energy is struggling to set up because of the “beurk” factor, but also because of the reluctance of many scientists to obtain pure urea.
For Earl Braxton, American giant in mobile toilets:

Extracting urine would be much more profitable than extracting gold or oil. For this resource has the advantage of being inexhaustible. “

For all of these scientists, each of us produces enough urea over a year to drive a car over 2700 kilometers. If this method is substituted for conventional wastewater treatment processes. This would firstly save energy. But secondly, to avoid the release into the environment of large quantities of livestock effluents that are polluting.
It must be known that the urine is rich in proteins and plays in this case the role of organic matter. Electrolysis of urine consumes less energy than water. It releases more hydrogen atoms from urine than from water. Research on renewable energy from human or animal waste needs to be emphasized.
In the case of animals, it should be emphasized that, for example, an elephant can urinate about 160 liters at one time. Its bladder is nearly 2 meters high and contains the equivalent of three large trash bags of pee. All these tons of pee, can be a non-negligible alternative to new forms of energies. The Munich zoo in Germany uses elephant excrement to produce electricity. It supplies 5% of its energy needs thanks to the 2000 tons of excreta produced by African elephants.
How do they do it?

Not only is the heat from the biogas processing used to heat the gorillas, but they also use the solid residue called digestate (derived from the methanisation of excreta) as an organic fertilizer for crops. Many Zoo, in my humble opinion should be inspired.
All this reminds me of the young William Kamkwamba in Malawi, who was working on a biogas digester project in the Masitala village, using cow dung to produce gas for cooking, thus providing an alternative energy source to firewood. Then, the processed slurry can be used as fertilizer for crops, resulting in a win-win situation for women. His project thus reduced the excessive dependence of firewood and global deforestation.
For lovers of science, we count on you to innovate and go even further in all this research.

In conclusion, these young girls give hope to the countries of Africa and all those in the process of development, which suffers from the lack of electricity. We must continue to build on youth, because they are the future of tomorrow. These young girls, passionate about science, are actively working on other projects such as radar bomb detection, a driving force for bicycle safety and also paper from corn straw (in agricultural waste), to save our trees and our environment.