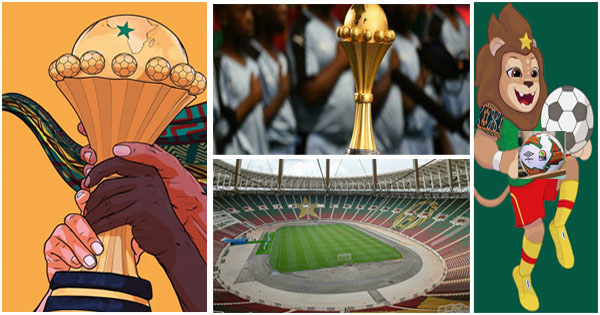 From January 9, 2022 to February 6, 2022, Cameroon, country of the “Indomitable Lions” will host on its soil the 33rd edition of the Africa Cup of Nations. Favourite and winners of the CAN 2017 in Gabon, the Indomitable Lions open the ball against Burkina Faso.

1) For this 33rd edition, 24 countries will compete in the African Cup of Nations.

For the supreme title, 24 African countries will compete until February 6.

The CAF is normally held every two years, except for this 33rd edition. Due to the health crisis, it had to be moved from 2021 to 2022.

The top two finishers in each group will advance to the round of 16, along with the four best third-place finishers.

Then, there will be the quarters and semi-finals. Everything will conclude with the Grand Final at Olembe Stadium.

The soccer tournament will be exciting. There will be 52 matches in 4 weeks.

The matches will take place in the following stadiums:

4) The final will be held on February 6 at the Olembé Stadium in Yaoundé.

The grand finale of this 33rd edition will take place at the Olembe Stadium in Yaoundé.

5) Who are the favorites?

The favorite teams are:

For this 33rd edition, Mola is the mascot of the CAN 2022. He beautifully displays the green, red and yellow colors of the national flag of the Indomitable Lions. It refers to the fraternity and conviviality. It is the work of the autodicdate Felix Fonkoua. The ball used is the Toghu of the English equipment manufacturer Umbro.

5) “Africa Smile” is the official anthem of the African Cup of Nations.

This song highlights the love of football in Africa. It will be performed in French and English.

6) Eto’o is the president of the Cameroon Football Federation.

At the end of 2021, Samule Eto’o was appointed president of the Cameroon Football Federation. The holding of this Can was questioned because of the Varian Omicron. But the former Cameroonian international, Samuel Eto’o has campaigned fervently for it to take place.

7) The opening ceremony will be provided by Fally Ipupa

The Congolese singer will open the ball with his most beautiful songs during the opening ceremony, before the kick-off at the Olembe Stadium in Yaoundé.

8) A colorful opening ceremony with the appearance of the Cameroonian president.

Virtual Lion, African music, the opening ceremony of the 33rd Africa Cup of Nations (CAN) is colorful before the match of the Indomitable Lions against Burkina-Faso.

One of the highlights was the rare appearance of 88-year-old Paul Biya. He stepped out of his convertible limousine onto the athletics track to hear the national anthem and receive a standing ovation from the crowd during a lap of honor.

The players of the 24 selections must have a negative test less than 24 hours before each match.

10) On which channels to watch the tournament?

You can watch the entire African Cup of Nations on beIN Sports.

You can watch the games on local channels.