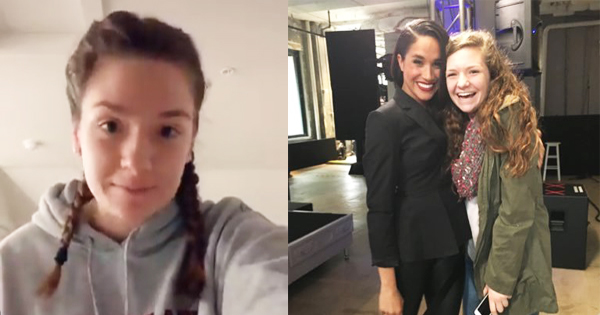 The story of Meghan Markle and Prince Harry began as a fairy tale. We were all captivated and enthused by this magnificent Metis and American Hollywood celebrity, who married a Prince. It has become and will remain a magnificent symbol of diversity in royalty. We all watched and watched her marriage on television with tears in our eyes.
But recently, many jealous and ill-intentioned people harass her and try to give her a dirty image.
Please don’t be naive. There is a campaign of harassment and denigration of which Meghan Markle is the victim.
The poor woman was harassed during her pregnancy and has suffered the worst criticism so far.

“I know her as the most genuine, passionate and caring human being who really had an impact on my life,” Sorrels said. “The hate against her is garbage.”

Emily Sorrels, a fan of Meghan, decided to show the true, compassionate face of Markle, whom we do not see enough in the media. She was lucky to meet her. She testifies to the sweetness and the kindness of the actress of Suits in a clip.

Indeed, in March 2016, she had published a clip of support and thanks to the Duchess, who went viral again on January 14, 2020 on Tik Tok. Her message was viewed more than 7 million times and received more than 415,000 likes.

A Duchess with a big heart

Emily Sorrels shared on TikTok a video that explains like the actress of Suits to change her life positively. Before meeting Meghan, her fan suffered from anxiety and doubt. Our generously-hearted Duchess was a real inspiration for her, because it allowed her to have confidence in herself and to dispel her anxieties.

Emily also points out that the former actress stayed in touch with a group of women who followed her on social networks.

In 2016, Emily had the chance to meet her idol while attending the live recording of AOL BUILD (now BUILD Series) in New York. Sitting in the front row, she was very surprised when Meghan mentioned it.

Then Meghan came down from the stage to give Emily a big hug and gave her a nice letter. This symbolic act touched the heart of his biggest fan. She was happy because the Duchess was doing everything possible to make her feel special.

A video of me meeting Meghan Markle just went viral. Allow me to explain. She is genuinely the most inspiring human I’ve met. Through her social media & blog she taught me to be a more confident and passionate version of myself. The hate against her is garbage pic.twitter.com/euHjKkxp7D

After the interview, Meghan spoke with Emily off camera, putting her hand on her arm to reassure her.

“I will forever remember the day I met my idol and my inspiration, I will never forget all she has done for me. I am so grateful and happier than I have never been in my entire life.”

“She has proven to me that she is, in fact, a caring and genuine human being. She is not fake for the cameras or trying to portray something different than her real self to the media. She is just lovely. Thank you thank you thank you Meghan.”

Before Meghan married Prince Harry, she used to take time to support various charities. She always helped others. She is the real Meghan Markle, a kind and gentle woman who is unfortunately the victim of media harassment and jealousy today.

Everyone who criticizes Meghan today is just jealous of the actress’s success. Why didn’t they criticize her before? You all know the answer inside of you.
Look, it was enough for her to marry Prince Harry. And these people, whose motivation is unknown, do their utmost to tarnish her image.

Prince Harry and Meghan Markle in the face of all this hatred abandoned their senior role, in January 2020, for the royal family. They just want to be at peace in Canada and finally live their lives. They also decided to be financially independent. And this gesture is to be welcomed. We wish them much success and happiness.
When you witness someone who is being harassed unfairly. You have a responsibility to respond. Many people face harassment every day. And it’s not fair.

What do you think ? What is your opinion on the media harassment suffered by Meghan?