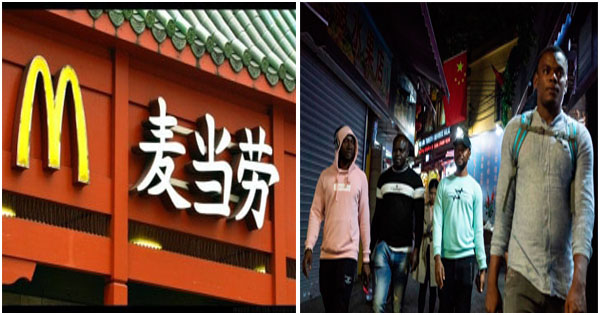 Since Covid-19 started in the Middle Empire and has spread all over the planet. African people have become victims of xenophobia, racism and discrimination in southern China because of a simple rumor that 5 Nigerians who were infected with Covid-19 escaped their quarantine. One wonders how it could have happened, when one knows that it is a country extremely watched with cameras everywhere and temperature tests on every street corner.

Since then, black people have experienced a nightmare in China. It is unfortunate to see these appalling acts of discrimination in the midst of a pandemic.

Free movement is prohibited for Africans. They are victims of serious discrimination.

Compared to Mcdonald’s, what happened?

A Mcdonald restaurant in southern China has banned Africans from entering their store.

A video circulated on social media and aroused general outrage. We see a notice explaining in English at the door of a restaurant that “blacks are not allowed to enter” in a McDonald’s in the city.

“We have been informed that from now on, blacks are not allowed to enter the restaurant,” the notice said, hanging in front of the McDonald’s in Guangzhou. “For your health, consciously inform the local police of medical isolation, please understand the inconvenience caused.”

Again, for those who still doubt that Black people and particularly #AfricansinChina are being targeted we feel it is our duty to share this. A sign at a @McDonalds restaurant seems to make this perfectly clear pic.twitter.com/FaveKrdQHi

The fast food chain has apologized.

The social media video sparked widespread outrage. Following this, the Mcdonalds company apologized for the actions of this franchise, which refuses to serve blacks and essentially bans them from the restaurant.

A spokesman told AFP on Tuesday that the establishment had been temporarily closed for a staff training session on Sunday.

But the problem does not stop there. The black community is also the victim of evictions, bans from entering businesses, placement in quarantine and excessive screening.

On April 13, about twenty African ambassadors were received in Beijing at the Ministry of Foreign Affairs by the Deputy Minister of Foreign Affairs, Chen Xiaodong. He notably promised to “lift the sanitary measures concerning Africans, with the exception of confirmed patients [suffering from Covid-19]”.