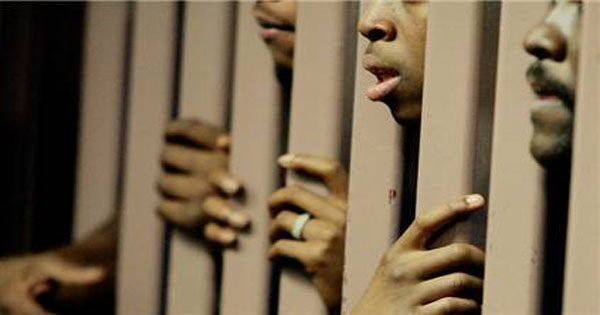 The Second World War was a traumatic time for all peoples of the story. The Nazi regime killed millions of Jews, gypsies. But were you aware of sob pennies Nazi Germany and blacks killing in concentration camps?
Black people in Nazi Germany
In the 1920s, there were more than 24,000 blacks in Germany. They came from German colonies in Africa. Some blacks were married to German women and had children with them. With the rise of Nazism in Germany, living conditions of “Negers” have become extremely complicated. The defeat of the Germans against the French army in 1914-18, the occupation of the Rhineland by the French, Belgian and African soldiers colonized gradually create a nightmarish climate for blacks living in Germany.

a. At the beginning
At first, the Nazis did not know how to process black. The German Nazis regarded as “inferior race” but they were not a direct threat to them. For a time, the young German even blacks were allowed to join the Hitler Youth. But the loss of colonial territories, following the defeat of the First World War and the occupation of the French, Belgian and Senegalese, Moroccan and Madagascan soldiers in the Rhineland created a tense climate for blacks living in Germany. The Germans felt humiliated and were extremely angry against people of color who fought for France in this period -There. They saw a very dim dating between African soldiers and German women. The Nazis have saw blacks as “beasts or subhumans” and wanted especially not they sully the purity of German blood. Stop supporting this, the Germans began to persecute blacks in Germany.

b. Establishment of a Machiavellian plan against blacks in Germany

First, the Germans set up a racist propaganda campaign against the Jews, but also black. It was called “Die Schwarze chanted (am Rhein) or Die shwarze Schmach (am Rhein)” which means Black shame. Black propaganda depicted the military as “rapists” or carriers of venereal disease from soiling the German woman. This propaganda aimed to criticize the occupation of the Rhineland and the other side to fight for the protection of German blood. For as I said earlier, the Germans had a negative vision about people of color. The mix between German women and black loath them. It was a waste of racial pride! 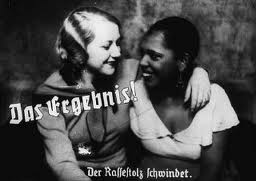 Nazi propaganda
The friendship between an Aryan and a black woman is a loss of racial pride.

Some examples of discriminatory laws and rules for black:

The categories of black people affected by Nazism

They can be grouped into 4 categories. 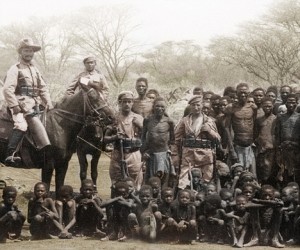 To conclude, all these examples show how black life was a living hell. They lived in constant fear. Many blacks were persecuted and deported to concentration camps and death camps. The fate was the same for all. Whether you’re black German by birth, fighters or American colonial troops, citizens of occupied countries, strong, you were housed in the same boat.