The mother of 20,000 children: Maggy Barankitse an exceptional woman 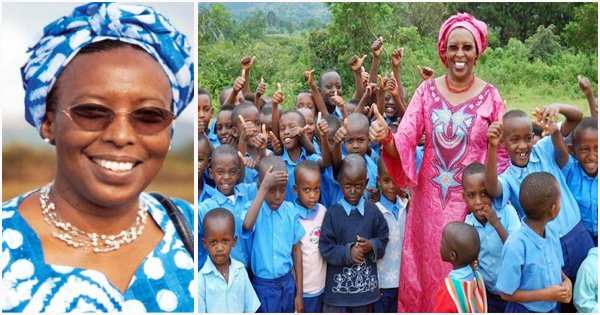 The mother of 20,000 children: Maggy Barankitse an exceptional woman

Afroculture.net tells you today about an exceptional woman, a woman with a big heart, who fought against ethnic discrimination in Burundi.

The birth of an exceptional woman

Nickname mother to 20,000 children, Marguerite Barankitse was born in 1957 in Burundi, a small country in central Africa. She is Tutsi and Catholic. His widowed mother, who adopted 8 children, remains an example for her. She instilled in him values of brotherhood, sharing and compassion.

She continued her studies and became a 22-year-old French teacher at the secondary school in her hometown Ruyigi. As an activist of the equality of peoples, in 1983 she denounced the school discrimination suffered by Hutu children. She is sanctioned by the school and relieved of her teaching duties. At 23, she adopted Chloe, a Hutu orphan, who cried a lot in her class, because she had no more family. Instead of getting married, Maggy decides to dedicate herself to the poor by giving them a home of love and hope.

Witness the conflict between Hutus and Tutsis in Burundi

Since the assassination of the first democratically elected President of the Republic, Melchior N’Dadaye, the country has suffered a fratricidal war that will cause more than 800,000 deaths between Hutus and Tutsis. Hutus take revenge for the death of Melchior N’Dadaye by massacring Tutsis. And the army intervenes and begins to massacre the Hutus. It’s a tribal war without end.

On October 24, 1993, she became the direct witness of this conflict and narrowly escaped a massacre. She has adopted 7 children and continues to support around 20 orphans, Hutus and Tutsis. Chaired by rebels armed with machetes, Maggy and her children take refuge in the bishopric of Ruyigi.

A brave woman, she hides the children in the cupboards of the sacristy. Unfortunately, they will be found. Maggy will be bound naked to a pole and she will see under his eyes, 72 people, including Juliet one of her friends, to be executed. Among these armed groups, there were members of his own family. Very angry at her for saving the lives of these Hutu children, they decide to save their lives. With more than twenty children who miraculously survived this tragedy, Maggy goes to hide with a German who lives a few kilometers away. Among these adopted children, there are Lydia and Lysette, the children of Juliette.

Sensitive to all the horrors she saw during the civil war, she decided to change things by becoming an angel of peace.

But ethnic violence is becoming more virulent. Many abandoned children come to his door to ask for help. She asks herself a thousand and one questions. How to give happiness to his children? How to put them safe? How to instil in them values of peace and tolerance?

Barankitse then decided to create Maison Shalom in May 1994 in buildings lent by the bishopric.

“We had to do, together, the work of mourning and one day, turn the page. Forgive. I could not do it right away. Besides, if I had not been a Christian, I think I would have committed suicide. I felt betrayed: my blood brothers had killed my family. At first, I was driven by a mad rage. I spent three months without shedding a tear. Then, I cried. Long time “.

“Some left, but others came to ask me for forgiveness. It freed me. When we can not forgive, we stay curved back. “

Shalom House is a Non Governmental Organization (NGO) and a haven of peace in the city of Ruygi. It is a refuge, a place of refuge dedicated to abandoned children, orphans, demobilized child soldiers, whatever their Hutu or Tutsi ethnic groups, where they can feel safe and learn to live together. It employs 600 people and supports 60,000 farmers.

His goal is to reintroduce life

Shalom House is a Non Governmental Organization (NGO) and a haven of peace in the city of Ruygi. It is a refuge, a place of refuge dedicated to abandoned children, orphans, demobilized child soldiers, whatever their Hutu or Tutsi ethnic groups, where they can feel safe and learn to live together. It employs 600 people and supports 60,000 farmers.

His goal is to reintroduce life

In this house, the children are fed, dressed, cared for and educated. There is a farm, a hospital, a library, a mechanical workshop, a restaurant, a cinema, a hairdresser, a cybercafe. At the Angels cinemas, children open up to the world watching films about Gandhi or Mandela. In the garage of the Angels, child soldiers and those who come out of prison learn mechanics.

With perseverance, a lot of faith and patience, Maison Shalom becomes a huge complex of schools, hospitals and a network of care. In 10 years, the house Shalom will become the city of Angels.

Throughout her fight for life and equality of opportunity, Maggy has saved more than 40,000 children. Thanks to the good education they received, they were able to change the course of their lives and have a job. Others have decided to continue the fight of their moms with a big heart, by opening Shalom Houses in different regions of Burundi.

Later with her team, she opened other homes to help the children victims of this fratricidal war and to insert them into society.

Flight and exile from Burundi to Rwanda

In 2015, she is sentenced to exile. Threatened by the government, she is forced to flee Burundi, which is facing a major political crisis. All those who protest against the power in place, are repressed by the blood.

Shalom House is closed under the pressure of the militia. She is dedicated to helping Burundian refugees in neighboring countries. She evacuated more than 50 children to Rwanda. Thousands of frightened and panicked Burmese flee to neighboring countries such as Rwanda, Tanzania, Uganda or the DRC.