Brave, generous: Harry and Meghan deliver meals to most vulnerable on the streets of Los Angeles amid coronavirus pandemic 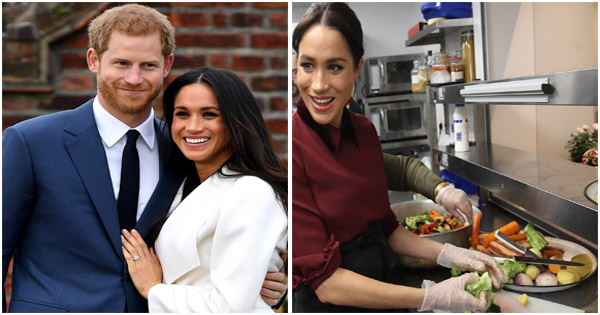 Brave, generous: Harry and Meghan deliver meals to most vulnerable on the streets of Los Angeles amid coronavirus pandemic

Since April 1, Prince Harry and Meghan Markle have officially ceased to be active members of the British royal family. The Duke and Duchess of Sussex moved to California last month after deciding to distance themselves from the royal family and become financially independent.

On Easter Sunday, they made their first public outing with Project Angel Food volunteers, delivering meals to sick people in West Hollywood on the streets of Los Angeles in California for two days.

n a press release, Harry and Meghan distributed these meals to lend a helping hand to the volunteers of Project Angel Food, an association that provides free meals to sick people who are unable to do their shopping or cook for them- same. But also, to support the drivers of the charitable organization subjected to an increased workload since the establishment of containment in California.

Organization director Richard Ayoub said the Sussexes first volunteered last Sunday, Easter Day, before repeating the experience on Wednesday, April 15, 2020. They wore gloves and masks and we followed strict guidelines for social distancing. They also wanted to know more about the organization’s customers and how “medically suitable” foods are made.

“They gave meals to around twenty of our customers, and they were delighted,” he added.

« What Meghan said is she wanted to show Harry Los Angeles through the eyes of philanthropy. It’s just beautiful … Our clients are clients who are often forgotten. They really wanted to go visit these people. They wanted to see them and talk to them and hopefully put a smile on their faces,” he continued.

« I’m amazed that they chose to help Project Angel Food. They care about the most vulnerable. These are the people who are most at risk of contracting the coronavirus, because they have weak immune systems, including heart patients, lung diseases, diabetes. Most of them are over 60, ”said Richard Ayoub.

Apparently, TMZ got Meghan and Harry on video delivering some of these meals. https://t.co/rEpJGdhE13 pic.twitter.com/vZsqQoIRri

Harry and Meghan have been spotted out of lockdown since their move to California, the couple delivering meals to vulnerable families. @KimberleyCaines #9Today pic.twitter.com/q59z1FvRMi

Since the start of the health crisis, the association has delivered around 1,600 meals a day.

It’s really, really amazing. We loved having them and they are the most down to earth people. “

Testimony of Dan Tyrell, one of the recipients of the couple’s deliveries.

He told WeHoVille.com, a West Hollywood media outlet, that he did not immediately recognize Meghan and Prince Harry.

“I thought that tall red-headed guy looked pretty familiar, and that girl was very pretty. Then I saw the large black SUVs with the security guards behind them,” he said.

“They were both nice and very down-to-earth people,” he added. “They had masks on, and they were dressed down with jeans, but very nice jeans.”

Harry and Meghan are forces for change. They plan to create a foundation called Archewell and also plan to build a website to help others. This week, the couple donated the benefits of their marriage in the amount of £ 90,000 to the charity Feeding Britain, which helps provide food for families in need.