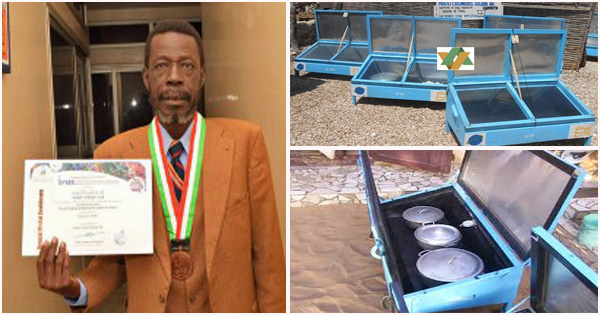 Africa is on the move, but the continent suffers daily from lack of access to electricity. To cook their meals, people use massively firewood, which has disastrous consequences on the environment. Because excessive use of this wood, without reforestation leads to deforestation.

To improve the living conditions of people, the teacher and school director in Sinthiou-Garba, Abdoulaye Toure had the idea to create a solar oven for cooking food. This solar cooker is a nice ecological alternative to deforestation and the energy crisis.

“We have to be like the Japanese, the Chinese, because today we are in the arena of development,” so we need to create African technology while preserving our environment and our cultures and being pioneers of it. ‘

In 1900, he created a first prototype. At first, when he started creating his first oven, people thought he was crazy. He had to hide with his wife and a friend to do the first tests. The most beautiful moment that marked him was when they managed to leather their first chickens. But the problem was that the cooking was too slow.

And in 1992, he launched his development project. He distributes more than a hundred to the people of the village. Thanks to the contribution of the women who used it, he was able to identify the advantages and disadvantages of his device to improve it.

How does the solar oven work?

The solar oven captures solar energy and turns it into heat. The aluminum box concentrates the sun’s rays. In order for the outer shell to not heat up, there is a larger and insulated box. This solar cooker is very useful for the preparation of food. No need for firewood, we call upon the sun which is in abundance in Africa.

Establishment of training to use the solar oven.

The entrepreneur Abdoulaye Toure always makes contact with the population of villages in Senegal to train them and explain the benefits of the solar oven.

For the fabrication of these ovens, he shared his technological knowledge at the Derklé Research and Testing Center (CRE), which offers training to 13 carpenters and 20 women in the region. This local workforce is effective for the creation of ovens in large numbers.

The inhabitants are conquered by the solar oven.

“Every morning, I take out my solar cooker and wait for the sun to cook for me.The cooking is slow, so I’m not afraid that the bottom of the pan will burn, I just have to move the oven from time to time. follow the sun’s rays, “Ndong told IPS.

“As a father, the oven saves me money,” says Diouf.

Price and functionality of the Solar Furnace.

Aware that life is not easy in Africa. The cost of ovens is lower than that of a conventional oven.

Thanks to its invention, 14,200 households living in Senegal are equipped with solar ovens to prepare their meals. This invention has been beneficial to improve their living conditions.

He has received many requests from other African countries such as Burkina Faso, Niger, Mauritania.

Our African entrepreneur teacher has received numerous awards and honors.