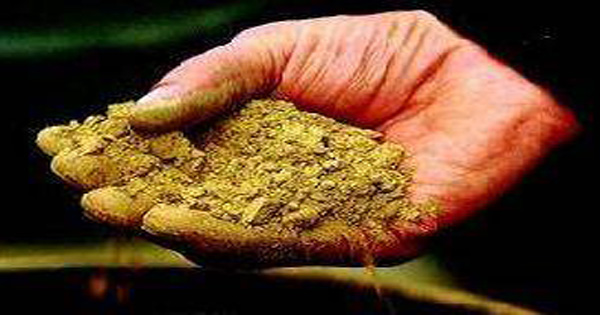 Rare earths, what is it?

Rare earths are a group of 17 metals “rare”, prevalent in abundance in the earth’s crust. Among the rare earths, we can cite yttrium, lanthanum, cerium, europium, neodymium, etc. These are chemical elements (atomic number 57 to 71), metallic-looking, responsive to high temperatures.

Through the above list, we see that the land is all around us, in every object that is used. This reason makes rare earth a true strategic and economic issue. In 2011, the rare earth market accounted for 128,000 tons and 1.25 billion. Following a population increasingly growing, the demand for rare earth is increasing. 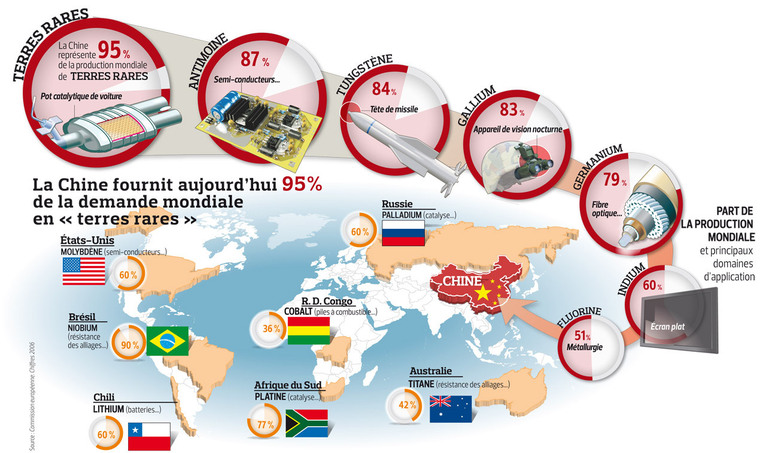 * At the beginning
Initially, the US was the leader in rare earth until the 1980s because they were the first producers in the world with the Mountain Pass mine in California. Due to environmental concerns, the United States decided in 2002 to set sleep this mine and to withdraw from the race for rare earths.
* Today
During the withdrawal of the United States, China, India, Brazil continued the race for rare earths. Undoubtedly, China has become the leader in the world production of rare earths, with more than 200 mines in Guangdong, Jiangxi and deposits in Inner Mongolia, Baotou. To him alone, they account for over 95% of world production of rare earths. Master of the game, it has eradicated all competitors by applying a price war without mercy.

What is the strength of China? Why this rule?

What are the leading companies in the field of rare earths 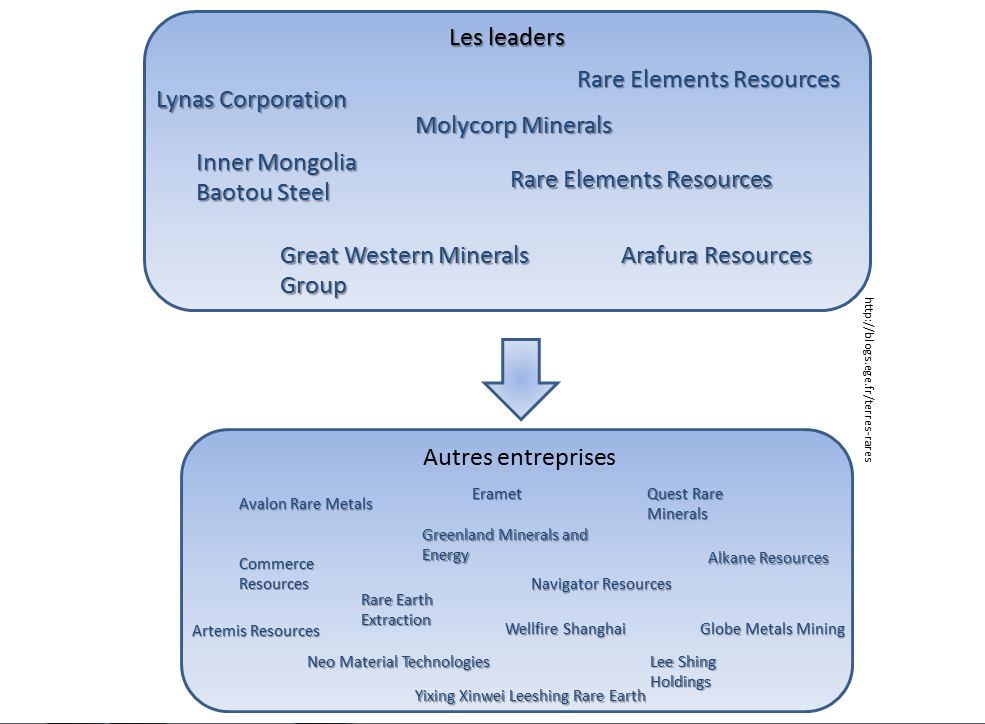 The leading companies in the field of rare earths

As I wrote in my previous articles 5 pull factors for investing in Africa or the African middle class target of choice for investors , Africa has become a key continent for all investors worldwide. Following the rush for rare earths, Africa has become the new strategic challenge of rare earths. I hope that African governments will pay attention to environmental hazards rare earths. Rare earths are a strategic asset, but the beauty of Africa comes from its exotic landscapes, beautiful forests, animals, etc. Are they are willing to sacrifice the riches and beauty of their country by going extracting rare earths that are dangerous to the environment and people? Do that, we worth the price? Let’s look at the example of China. True, they are leaders in the field of rare earth, but from the standpoint of the environment, “it’s catastrophic,” at the health of their people, “it is sad.” The future will tell.
A. Where are the rare earths in Africa?

B.  Rush of rare earths and other metals in Africa
* South Africa
With Brazil and China, South Africa was already in the race rare earths. It has mineral deposits of titanium, zirconium, etc. South Africa is currently developing several mining projects to provide rare earth:
_The Steenkampskraal mine: it will be usable from 2013.
_The Zandkopsdrift mine: production will start in 2015. Annual production is expected at 20 000 tonnes of rare earths a year.
*  Congo-kinshasa
Congo has 50% to 60% of cobalt deposits. Its production covers over 40% of global needs. It is the leading producer in this field, closely followed by Zambia and Uganda. REE in Congo are at the eastern DRC. The eastern part of the DRC is heart of desire for other countries.
* Tanzania
It was discovered rare earths in Tanzania. Monteron Mining, a Canadian company already has invested more than $ 4 million to develop these deposits. More precisely, it is in mine Wigu Hill 170 km southwest of Dar es Salaam.
* Gabon
To Mabounié near Lambaréné, we found rare earth deposits. rare earth found there, niobium, tantalum, uranium. The French company Erasmet (Maboumine subsidiary) will create a plant to exploit the mine in 2014.
*Mali
There are also rare earths in Mali, but no operation has begun.
*Madagascar
It was discovered deposits of rare earths in Madagascar. On the peninsula Ampasindava the northwest of Madagascar a study estimated a potential of rare earth oxides at over 130 million tonnes, with more than 20% of heavy rare earths. The companies Rhodia (Solvay Group) and Tantalus (Germany) combine is through the “Tantalus project” to exploit rare earths in Madagascar, dated Thursday, April 26, 2012.
In short, through these explanations, we see that Africa has become a strategic issue in the field of rare earths. Africa also has the coveted metal that caused blood wars in those countries. include cobalt, coltan, copper, titanium. For example, in Congo, coltan mining wealth (Kiwu) or cobalt to cause the lives of over 5 million deaths.

Face a depletion of rare earths, with dramatic consequences on the environment and the Chinese leadership, other countries are trying to find alternatives to rare earths.

Recycling is the first solution on the rare earths. Indeed, we will recover rare metals in the electronic devices we use every day. To cope with the decline of the few Chinese leadership and the land, recycling becomes a raw material supply source. For example, the flow of post-industrial waste has already been made in the manufacture of magnets and semiconductors.

* recycling rate for dysprosium, neodymium and praseodymium are 1 and 10%.
*taux de recyclage du gallium (cellules solaires) sont de 10 à 25 %.
*recycling rate terbium, europium, yttrium (for lighting) are of roughly 1%
*Dysprosium, neodymium, europium and terbium are among the few land classified at high risk of shortages in Europe in 2020-2030 by the European Joint Research Centre (JRC source).
* The French company Rhodia began recycling the energy-saving lamps. For this, it has opened two factories in Saint-Fons (69) and Rochelle (17). In these plants is recovered white powder of low consumption lamps in Saint-Fons and is retiring at the Rochelle. In finality, extracted 6 REE and resells them. In addition, we continue recycling magnets for electric cars, hard drives, and rechargeable batteries, etc.
* At the University of Tokyo, Institute of Industrial Science has found a method to recycle up to 80% neodymium. Neodymium is a very important and coveted rare earth in green technologies.
* A group of Idaho National Laboratory scientist recycle fissile material from spent nuclear fuel rods. These researchers will apply the same methods to separate rare earth metals and other critical materials to consumer products. Read  ici

We believe that electronics is like another type of ore,” says Eric Peterson, the driver of the business line for the INL Process Division of Science and Technology. “Consumer Recycling efforts today to recover about 40 to 50 percent of critical materials.” Our goal is to get more than 80 percent as the recovery. “Many of these are same as nuclear reprocessing research has focused for years. They are members of the lanthanide family, which inhibit the fission process, but are chemically similar to fissile actinides. INL scientists have a long history of expertise. They find new ways to effectively meet the lanthanides separated from complex mixtures. “in many ways, improving the recovery of critical materials is just a huge headache separations,” said Peterson. “INL has extensive experience in separations for nuclear and industrial applications. “

Of course, recycling can not cope with demand increasingly strong. It is a short term solution, extremely costly and not viable for all types of economic materials. But, it still allows secure, preserve rare metal resources.

The solution is to open or reopen dormant mines (closed) where rare metals are, that countries have put aside face competition from the Chinese.

Others read more about the substitution of rare earths. Indeed, we must develop products that have little or no need rare earths.
* For example, Toyota seeks to develop its hybrid cars, energy saving, using an induction motor without magnet. It could implement its strategy in the next two years.
* General Electric announces the creation of a wind turbine that needs very little rare earths.
* Toyota and General Motors prefer to rely on the induction motor that does not use some or magnets based on rare earths.
* Others choose the solution for synchronous motors (permanent magnet rotor). This solution is practiced by Siemens Leroy Somer.
* Samsung use optoelectronic materials to replace rare earths in some applications. Photonic materials enhance luminescence and have the advantage to dispense with rare earths. Samsung put into the search and opened an institute, with 3,000 researchers in the kynggi province in Korea.
*  Hitachi company had managed to create a rare earth-free electric motor, which is designed to blow air in buildings and factories. They use a patented technology, an iron heart-based amorphous metal, which provides a cheaper alternative for the same performance.

All countries of the world are scrambling to find alternative sources of rare earths. They seek rare earths on land or in the sea. The result is that there is rare earth in the bottom of the Pacific. Indeed, the Japanese discovered rare earth deposits in the Pacific as a layer of sludge. Furthermore, rare earths are also present in the sediments of the seabed in the eastern North Pacific around Hawaii and the South Pacific center east of Tahiti. Researchers in Japan have found rare earth deposits. There are over 393 projects ongoing explorations. The head deposits are Kvanefjeld Greenland Montvieil Quebec Mount Weld in Australia and Mountain Pass in California (in millions of rare earth oxides).

It is a real strategic war between countries, companies and geologists. Which requires taking into account the various constraints of cost, environmental issues (pollution) and extraction of rare earths.

Many deposits of rare earths may contain thorium and uranium “, emphasizes the Deputy Director of the Strategy BRGM.

Potentially toxic residues from metallurgy rare earths can pollute soil and water if strict management of these effluents is not in place.
It is essential to find greener solutions less harmful to the environment and health. It’s nice to have a nice cell phone, a flat screen TV or whatever. But at what price?

Vietnam include, Malaysia, North America, Australia, Kazakhstan, South Africa, where the new African countries. Specifically, you need to purchase from countries that are not under the control of the land of milieu.Il must create partnerships, joint ventures with other companies for the exploration and exploitation of rare earths. All projects must take into account the environment, the price and the people of these countries.
Other countries other than China has reserves of rare earth.

Rare earths are a considerable asset. But if owning rare earths harm the environment and health of workers or the public. I personally find it very dangerous. It says the last are first. And the first last. China has a virtual monopoly on rare earths. They got rich. But at what price? It neglecting their environment, the health of their workers or the population. They have a lot of work to try to make amends.

In conclusion, the countries that come to put in place effective alternatives that do not harm the environment or to people with less-polluting extraction methods. It is that country that will be a real strategic advantage over the other and will be the real winner of the race for rare earths long term. Certainly, they have work to do. But there are researchers, engineers in all these different countries.