Entrepreneurship: William Kamkwamba, an Innovator who harnessed the wind 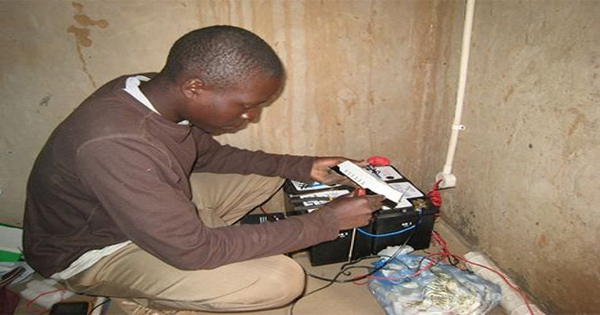 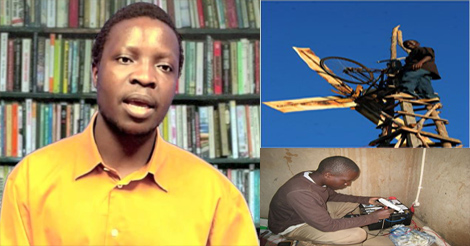 Entrepreneurship: William Kamkwamba, an Innovator who harnessed the wind

Is poverty a valid excuse for lack of perseverance?
We often meet with talented people. But, for lack of faith in God and perseverance, they give up at the slightest difficulty. With a ready-made apology, I am in poverty, I have no money, nobody believes in me, I have not had the chance to go to school. Even before they have tried, they have already given up fighting. In their mind, they have already lost, while deep inside them, they are filled with talents, ingenuity and God had already blessed them.
At age 14, William Kamkwamba, a young African boy from Malawi, will start building a wind turbine to save his family and his village from poverty. Unlike the others, perseverance, faith in God and courage will be his weapons in the face of the complexity of the world around him.
Indeed, in Malawi and many African countries, lack of access to electricity and infrastructure is a poison to society. 80% of the rural population, some 600 million people do not have access to electricity. This leads to economic, health and environmental problems. To overcome these difficulties, people cut down trees in large numbers without reforestation and used firewood for cooking food. The massive use of wood as a source of energy has serious consequences. It is the cause of accelerated deforestation and drought. But it also greatly increases greenhouse gas emissions. For example, William, in his narrative, explained that his family used kerosene to have light. The consequences were tragic, for these lamps produced thick black smoke which gave coughing and made her sisters sick. Unfortunately, the misuse of energy, due to pollution, the total absence of infrastructure and drinking water will lead to the death of millions of people in the underdeveloped countries.
In 2001, aged 14, William Kamkwanba, a young boy from Malawi, was forced to stop school. His parents, who are farmers, were unable to pay the $ 80 school fees at the high school because of the poverty and drought that struck the entire village. The drought had led to famine, ravaging everything in its path.
William explains:

In 5 months, all the inhabitants of Malawi began to starve. My family ate only one meal a day in the evening. Three mouthfuls of nsima (porridge of corn) for each one. The food crossed our bodies. There was nothing left. “

Unhappy, sad, he did not give up and decided to find a solution to help his family and at the same time save his village. As soon as he had free time, he would go to the local library of the neighboring village to read many books. He understood very quickly that knowledge is a weapon. And that even if he could not go to school. He would continue to educate himself through reading many books. In these discoveries, he particularly likes books of science and physics, which fascinate him completely. One day, a book “Using energy” attracted his attention. It is a technical manual, with drawings, in which he discovers the diagram of a wind turbine. In spite of the fact that he had difficulty understanding English and without help, he began to scrutinize and analyze the drawings to construct his “windmill”, which is in his mind similar to a windmill.
He tells in an interview:

I was determined to do everything I could to receive an education. So I went to the library. I have read books, books of science, especially physics. I could not read English well. I used diagrams and images to learn the words written around. “

Through ingenuity and perseverance, he came to wind and tide to build by himself a wind turbine. People, including his mother, laughed at him and called him mad, for they did not understand him. But William, misunderstood, does not renounce and abstracts the world and all those people who sneer at him. He walks with his faith. In the depths of his heart, he knows he will find the solution.
William says:

I had to trust myself. After seeing the picture of the windmill in this book, I thought to myself, “Somehow someone built this machine and it was built by hand, and it was a human being who did that. I am also a human being. “

He takes notes, poses the problem and observes what is going on around him. He realizes first that in Malawi there is enough wind. And that the wind can help. In these books, he learns that a wind turbine can pump water and generate electricity. Pumping water, that meant irrigation. Everything was lit up in his head, he had finally found a way to fight the famine and irrigate the fields affected by the drought. He decided at that time to build his windmill (windmill in his head) but other problems must be overcome. Where can I find the equipment needed to build my machine? How to assemble? How do you deal with these people who make fun of me every day and treat me crazy?
First, he goes to the dump to find the equipment he needs. He takes a tractor ventilator, PVC tubes, an old absorber, a shock absorber, a bike frame, an old dynamo, plastic pipes and starts to build his first machine. Eureka, it works. He realizes that his machine is feeding the bulbs, then the switches and the circuit breaker. He even listens to reggae music from his radio with this electricity. It encourages him, by dint of tests, he builds his wind turbine nicknamed “The green machine. He measures 5 meters (16 feet high) and uses eucalyptus to make the wooden tower. This machine is incredible, because it is able to activate a water pump and thus irrigate the fields of his family. He goes back to the neighboring library, returns his book and the librarian asks him:

You built a wind turbine using the knowledge that is in this book? And he answered, “Yes.” “ 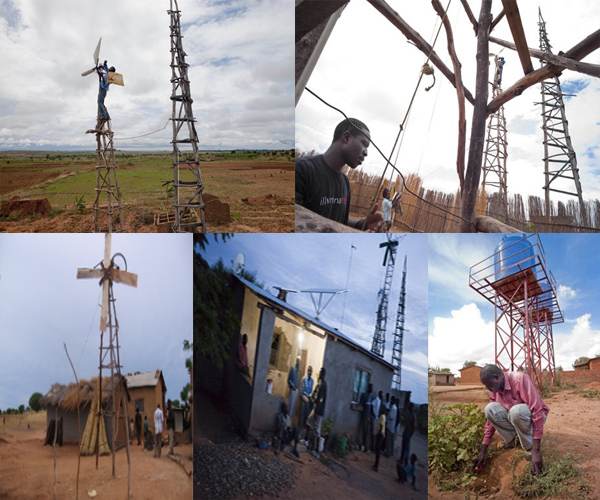 The people of the village are amazed and amazed. They applaud him and start to line up in front of his house, to recharge their cell phone. It is impossible for him to get rid of them, they are everywhere. His story makes a noise because his machine has changed his life. Journalists, bloggers, TV talk about him and invite him to many technology conferences. All marveled by its history, which is a true testimony of faith.
Investors rush at him and finance these studies. He goes to study in South Africa in an African Leadership Academy in Johannesburg. He then graduated in 2014 from Dartmouth University in the United States. Despite all this, William Kamkwanba remains humble and simple. He dreams of helping all of Africa by setting up his own wind turbine and solar panel manufacturing business.
William states:

I would like to say something to all people, like me, to the Africans and the poor who struggle with their dreams, God hear you. Maybe one day you’ll see this video on the internet. I tell you, trust in yourself and believe it. Whatever happens do not give up. “

In an interview, he says: “In Africa, all intelligent people leave the country. That’s why I want to go home and develop my region. Who else is going to do it? An aid organization? The government ? No, we have to do it ourselves. “
Renewable energies, such as solar and wind, can be a solution to the lack of infrastructure. The government needs to help people through education and training. They need to know how to use the clean materials of their regions, and in case of breakdown know how to repair them.
William has applied his talents to Africa, especially in his native village. In what ways: 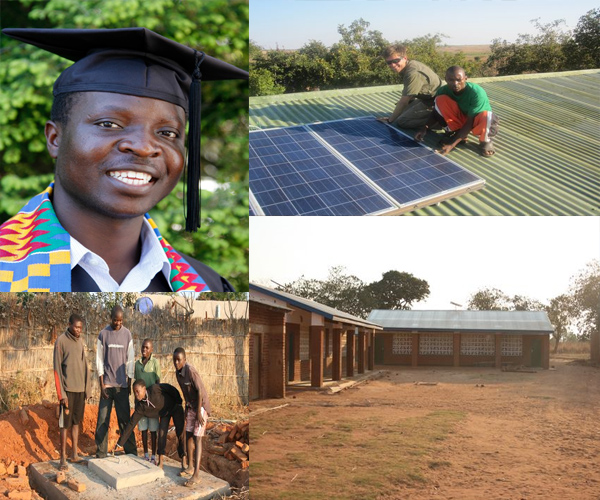 He dreams of helping all of Africa by setting up his own wind turbine and solar panel manufacturing business. He continues to give lectures on these many discoveries. But he also wants to share his knowledge by creating an innovation center where students from different universities and colleges can work together to develop ideas that help solve the problems that people encounter in different communities.

Perseverance, faith in God, self-confidence and courage are weapons against all the difficulties of the world. When you want, you can change things in this world. If you are parents, encourage your children to succeed by enrolling them in school. If there is no school, encourage them to learn through books. Encourage them!

If a 14-year-old African boy has succeeded in changing his condition of life with faith, courage, knowledge and perseverance, despite mockery and difficulty. It has enabled a whole village to benefit from electricity and to face poverty. So why can not you? Stop finding excuses, which are only reflections of your own fear. True wealth is inside of you, in God, so get to work and believe in yourself!