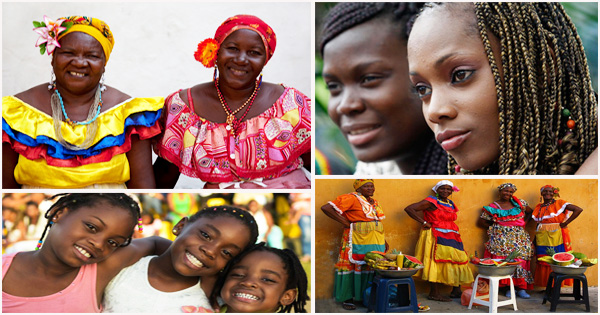 Afro-Colombians: proud of their African roots.

Afroculture.net goes on a journey to discover what is heard and not seen enough. We set foot in Colombia to discover the history of Afro-Colombians.

Afro-Colombians are the black people living in Colombia. They are descendants of African slaves deported during the Atlantic slave trade. Very proud of their African origins, they represent more than 10.5% of the total population of the country, or 1/5 of the population of Colombia. Colombia is the second largest concentration of the black population in Latin America.

Between 1510 and 1851, the Spanish brought African slaves from Angola, Congo, Ghana, Guinea, Nigeria and Senegal to serve as labourers in Colombia. They were also there to replace the dwindling indigenous population, which was having difficulty coping with the work demanded. They are seen as soulless men and treated like animals. This slave trade was approved by the Catholic Church. They disembarked in Cartagena, which in the 17th century became the main port authorised to bring in African slaves.

This concentration of labour was used to work in various difficult sectors. They were chosen because they were strong, muscular, but also able to withstand the worst work.

_Mining: these slaves work in the gold mines of Antioquia and Choco, in the Cauca Valley and in the Magdalena River region.

_Sugar sector: they also work in the sugar cane plantations.

_In the construction sector.

_In agriculture: they looked after the ranches and the livestock.

_ Domestic services: they helped in the settlers’ homes as butlers, maids and others.

Some notable revolts of Afro-Colombians

There have been revolts for freedom. One of the most important was in 1529 when the slaves burnt down the town of Santa Marta. It was rebuilt in 1531, but was burnt down again in another revolt in 1550.

In 1598, 4,000 slaves destroyed the most profitable gold mine in Zaragoza.

Some slaves called “Cimarrones” fought with all their strength to have their freedom and affirm their Africanities. They took refuge in the jungle by creating Palenques. The first “palenques” were established in the 16th century along the Atlantic and Pacific coasts

We can also mention the very popular slave Benkos Biohó, from Guinea-Bissau, who organised a military resistance with fugitives to conquer Cartagena. They were located in the María Mountains. He later signed a peace treaty in 1605 that recognised the autonomy of Palenque de la Matuna. In 1608, he created the Palenque de San Basilio, which would remain one of the main places of expression of Afro-Colombian culture in the future.

The Spanish colonists had subdivided the blacks into different categories:

In 1851, there was the process of abolishing slavery in Colombia. But they were excluded from society without citizenship rights. It was not until 1991 that the new Colombian Constitution, under Article 55, considered them as legal persons, forming a community.

Afro-Colombians suffer from racism and racial discrimination. Their lives are very difficult, as they are considered second-class citizens. They are forced to survive from day to day and many live below the poverty line. They are considered a minority and are not represented in films. Marginalised, often excluded, black people often have demeaning roles in Colombia. They speak Colombian Spanish. Others speak San Andrés Creole and Caribbean English.

According to the CIMARRON movement:

The cities with the highest Afro-Colombian populations are:

The term “nigger” is rarely used in Colombia. It is considered disrespectful and derogatory. Afro-Colombians are referred to as :

Recognition and progress for the black community in Colombia

In 1990, the Colombian black political organisation emphasised “black identity”. In 1993, it gained ground. Law 70 was passed. It prohibits discrimination against blacks and better representation of the black community in government and industry. It also adds collective land rights to Afro-Colombians.

The Colombian Constitution of 1991 recognised the cultural rights of the country’s ethnic minorities and the right to own and live collectively in their ancestral territories. Law 70 of 1993, for people of African descent, and Law 60, for indigenous people, legally confer this right.

Regarding religion, most Afro-Colombians are Catholic.

Art and music in Colombia are inspired by African culture. Examples are musical styles such as cumbia (from the Bantu word nkumbi, which means drum), abosao, vallenato, currulao, champeta, bullerengue, mapale, which come from the Afro culture.

There are many Afro-Colombian hairstyle competitions that still draw influence from their African origins.

On the Caribbean coast of Colombia, in San Basilio de Palenque, near Cartagena, the inhabitants live according to African customs, rites and traditions, as their ancestors did. This place is very famous, thanks to the signs where you can see Afro-Colombian women with black skin, wearing multicoloured dresses. They walk around swaying their hips, with cups of fresh fruit on their heads.

San Basilio of Palenque is considered, since the 15th century, as the first village of free slaves in South America. They symbolise the courage of the freedom struggles of the cimarrones, who fled their owners for a better life. The term “palenque” expresses a symbol of freedom because anyone who became a member was automatically free. This region is also considered the cradle of Colombia’s African cultural wealth. The palenqueras preserve the African traditions brought by their African ancestors. In terms of language, the Palenquera language is a creole language based on the Spanish lexicon, but with the morpho-syntactic characteristics of the indigenous languages of the African continent, especially Bantu. The researchers also detected that the Palenquero lexicon includes words from the Kikongo and Kimbundo languages.

Most of the inhabitants of Palenque still use their own language, their own style of music and dance. They practice a kind of voodoo, according to local legend.

The Raizals are called SIFAPARANS”. They are an Afro-Caribbean protestant ethnic group, who speak San Andrés-Providencia Creole. It is an English Creole, living in the archipelago of San Andrés, Providencia and Santa Catalina. They are strongly linked to the Caribbean cultural peoples of Jamaica and Haiti.

Like Afro-Americans, Afro-Colombians carry out DNA tests to find out which African country they come from.

What do you think of it?