The gold producing country in Africa 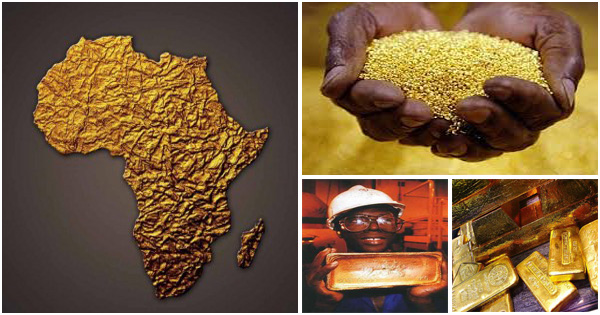 In times of crisis, there is a veritable gold rush. The yellow metal is the leading product of which all investors snapped. The African gold has become a real issue. With half of global gold reserves, Africa has become a key continent to produce gold. But what are the gold producing country in Africa? Where are the largest gold mines in Africa? Which companies operating in these countries?

The gold producing country in Africa 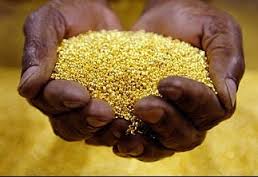 A. Its positioning
In 1886, it was discovered the first mines in South Africa. For a long time it was the largest producer of gold in the world. With more than 45 000 tonnes of gold extracted from the mines around Johannesburg. At the time, gold production was so substantial that we could extract more than 1000 tons of gold in a single year. It is a true historical record for South Africa. Compared to the African continent, South Africa is the largest gold producer. Gold production increased by a ton of gold (+ 0.53%) between 2010 and 2011. It increased from 189 to 190 tonnes of gold. According to Us Geological Survey (USGS) (2010-2011).

In Africa, the southern African country holds 35% of the resources and 99% of the world production of gold. The gold sector is very important, as it helps in 24.7% of the mineral’s turnover and employs 56% of the workforce. But since 2007, gold production in South Africa is facing a slowdown. This stagnation has allowed China to overtake South Africa. For example, January to May 2012, production is down 10%. Still, the USGS is optimistic because the country still has good reserves estimated at about 6,000 tons.
B. The gold mines in South Africa
In South Africa, we deeply dig into the mines. Is carried underground operations, which reaches over 3.8 km deep. It may be noted that the regular fall of production in South Africa is due to the increasing depth of mining coupled with declining grades. The Driefontein mine is mine to remember because the amount of gold extracted annually are 35.7 tonnes of gold / year in 2007 The Witwatersrand Basin is the main gold producing area. It is operated exclusively underground. The Witwatersrand Basin has produced over 41 000 tonnes of gold. Virtually all production in South Africa is centered on the Witwatersrand Mine. The gold mine in Western Gauteng Province is the deepest gold mine in the world. She galleries that dig up to 3600 meters deep.

AngloGold Ashanti and Gold Fields are the two largest gold producing companies. The company AngloGold recently listed on the London and New York Stock Exchange. The company Gold Fields is very present in South Africa. It is the main producer of gold in South Africa with 4605 t in 2012. It operates the Kloof and Driefontein mines (KDC 29.1 t), Beatrix (9.0 t) and since 2007 South Deep (8.4 t). It is active in South Africa and Ghana with its new open pit mining, Tarkwa. But you can also find the companies Harmony, Durban Roodepoort Deep gold and ARM Avgold. 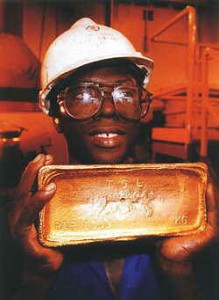 Gold bar in Ghana
A Its positioning
Ghana is considered the “gold coast” of African countries to the west. It is the second largest gold producer in Africa. In 2001, Ghana was producing 72 tonnes, slightly down from the previous year. According to the Chamber of Mines of Ghana, the country’s mines produced over 2.9 million ounces, against 2.6 million a year earlier. According to Us Geological Survey (USGS) (2010-2011).

In 2012, gold production was up 6% compared to the first half. According to Reuters, the same year gold sales rose 20% to 2.69 billion dollars against 2.23 billion in 2011.
B The gold mines in Ghana
In 2011, the mines of Ghana has produced more than 100 tons of gold. Tarkwa Gold Mine is the country’s largest mine. It is located in the south-western Ghana, about 300 kilometers west of Accra. It is operated by Gold Fields (NYSE: GFI). Gold production increased by 0.8% to 664,515 ounces. During fiscal 2010 Tarkwa produced 720,700 ounces of gold. The Ahafo mine produced over 531,470 ounces of gold in 2009, against 524,000 a year earlier. It is operated by Newmont Mining corp. The Damang mine is located in south-western Ghana, 300 km west of Accra. It has a mineral resource of 4.7 million ounces and mineral reserves of 2.1 million ounces. The Damang mine is the possession of Gold fields. The Iduapriem mine is owned by the company AngloGold. The mine produces on average 190,000 ounces of gold per year. AngloGold also has the Obuasi mine. She hopes the mine will produce approximately 400,000 ounces of gold per year in 2012.

AngloGold Ashanti (1.7 million ounces in 2001) is one of the leaders. It has four operating mines in Ghana and facilities in Zimbabwe, Guinea and Tanzania. It is also found in Ghana, Gold Fields. 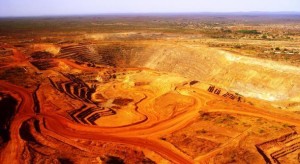 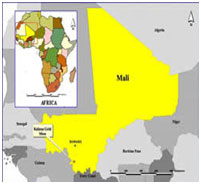 In ten years, Mali has become the third largest gold exporter in Africa after South Africa and Ghana. Estimated production is about 50 tonnes on average. Mali is becoming a major gold producer with several new mines developed by AngloGold and Randgold Resources. He produced 41 tonnes of gold in 2001, a significant increase over previous years. The majority of this production comes from three open pit operations at scale. In 2006, its gold exports tripled and exceed 56 tons. In 2009, Mali has produced more than 53.7 tons of gold. The new gold mines in Ghana provide an annual output of at least 45 tons.

B. The gold mines in Mali

The Sadiola gold mine is located in the Kéniéba region on the border between Mali and Senegal. In 2009, it produced more than 135,000 ounces of gold. Many gold diggers from Senegal and Mali go there to look for gold. Gold Kéniéba region, about 400 kilometers from Bamako, in the south-western Mali, near the border with Senegal, is a giant termite mound in the open. It is owned 41% by IAMGOLD, 41% AngloGold Ashanti, Government of mail 18%. The gold mine creates human and environmental consequences. For example, mercury poisoning Gold Kéniéba. The Gold Mine Yatela is owned 40% AngloGold, 40% IAMGOLD and 20% by the Malian government. Gold production from the mine Yatela began in mid 2001. In 2009, the mine produced 89,000 ounces of gold.

Active companies are Goldfields, AngloGold and IAMGOLD and the Malian government. AngloGold is present in South Africa, Namibia, Tanzania, Mali and Zimbabwe. The presence of AngloGold in Mali has increased with the green light to develop the deposit Yatela, the second gold mine of AngloGold in the country, after Sadiola. 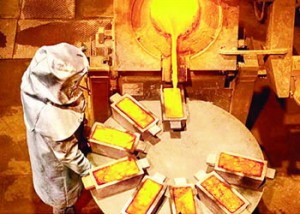 A. Its positioning
Gold mining has dominated Tanzanian industry for over a century. Tanzania is currently the fourth largest gold producer in Africa .It a country relatively under-explored. Gold production is estimated at about 50 tons. In 2001, gold production has doubled to 34 tonnes, following the development of new mines Barrick, Anglo Gold Ashanti Gold and Gold Fields in East Africa. Tanzania is sitting on a treasure of 36 million gold ounce. According to the USGS, the production of gold is unchanged. That is to say, 39,448 kg in 2010. The Handeni Gold District in eastern Tanzania contains numerous artisanal gold discoveries over several hundred kilometers. A recent significant gold discovery by Canaco Resources has turned this area into a major gold province. Brookemont Capital explores a contiguous property in the Northeast. The discovery Handeni and Canaco recently reported drill intercepts of 48.6 meters of 14.81 g / t gold. Handeni North Brookemont gold prospect consists of 63.4 square kilometers bordering Canaco discovery, about 175 kilometers northwest of Dar es Salaam.
B. The gold mines in Tanzania
Mine Mara Region resembles a huge career. 170,000 ounces (about 4.8 tons) were extracted. The mine has faced many owners until the company ABG resume in 2006. In 2011, ABG had a turnover of $ 200 million just with the North Mara mine.

C. Society & Organization
AngloGold Ashanti owns Gaita mine in Tanzania. Shanta Gold has 36 exploration licenses in four projects. African Barrick Gold is the operator of the Tulawaka gold mine in Tanzania DND project Inc holds a 30% participating. It also owns the mine Mara Region since 2006. It employs 360 people with North Mara. Unfortunately, the mine offers few jobs for the local population of about 70 000 people. It is not normal that a company earns as much revenue and does not work to the local population. This factor is very common in this sector. 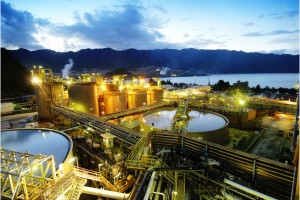 A. Its positioning
Guinea is the fifth gold producing country in Africa. Considers its production between 10 and 20 tonnes depending on the year. Production is expected to increase slightly following expansion and development of new projects in the country Gold is an important player in Guinea, with funding from international exploration increase significantly in the 1990s, Guinea began producing the ‘gold. Its production is about 60t / year for New Guinea. The majority of mining companies are active in Africa to extract gold.

B. The gold mines in Guinea
In May 2004, the Government of Guinea has placed an embargo on gold exports from Siguiri and diesel supply to the mine causing AngloGold Ashanti to close the mine facilities. The mine produced 252,795 ounces of gold in 2003. A second gold mine, the Lero – the Karta mine was developed by Kenor Norway. The mine currently produces over 100,000 ounces (92,733 ounces) of gold per year from a heap leach operation that processes ore from mineralized sandstone breccias and conglomerates. Lero The mine has estimated reserves of 13.7 Mt at 2.6 g / t. Kiniero (formerly Jean Gobele) mine Semafo was inaugurated in April 2002. The Kiniero gold mine is located in 500 km northeast of Conakry, Guinea Central. Construction of the mine “was completed in the budget of $ 12.4 million. Kiniero has an annual production of 60,000 ounces per year (46,728 ounces in 2003).

Given all its gold wealth, how is it that African gold too little benefit to the population? Where are the profits? Which flies the gold? What new methods of protecting minors from danger?