Jada Pinkett Smith is in the news right now about her relationship with Will Smith. But today, we’re going to talk again about a mythical hairstyle worn by the actress. We all remember the cult movie Matrix where Jada played alongside actor Keanu Reeves. In that movie, she had an ultra stylish look with a traditional protective hairstyle called the “Bantu Knots.”

But what are the Bantu Knots?

Bantu Knots is a traditional hairstyle of the Bantu people. It consists of dividing the hair into small portions, then twisting and wrapping the hair around itself to obtain small knots. They are braids rolled up on themselves. This hairstyle can be done with natural hair or with additions.

The origin of this trendy hairstyle.

n Africa, Bantu women wore this type of headdress for various occasions in everyday life or during traditional ceremonies. This hairstyle has become commonplace and has become trendy and popular. Many black and mixed-race women do this kind of haircut to themselves or their daughters.

With this ancestral hairstyle, Jada Pinkett Smith was able to stand out perfectly in the film Matrix Reloaded. It remains one of the memorable hairstyles of the beautiful actress and producer. With his elegant and chic haircut, his total leather look, Jada has filled his eyes.

No matter their colour, black or white, Bantu Knots of Bantu people have conquered millions of people. I can imagine the smile on the faces of the Bantu forefathers, if they knew that this magnificent hairstyle has stood the test of time. Many women and celebrities in Africa, in the United States, in France wear this style of hairstyle.

What do you think? Do you like this hairstyle? 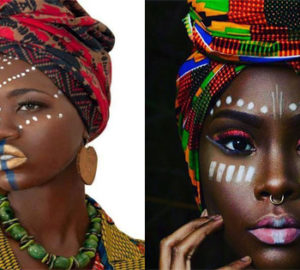