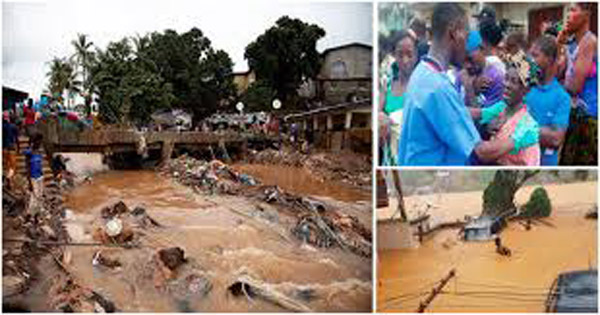 Floods in Sierra Leone. Who is mobilizing to help Sierra Leone?
Many people complain about the lack of media coverage on the African continent during natural disasters. When horrific events happen in Paris, Barcelona or elsewhere, Africans always bring their sympathies and compassions to those who suffer. But when the African continent is affected, there is a difference in size between media coverage of floods in Sierra Leone and floods of Hurricane Harvey in the United States. And, it’s sad, because all the lives are the same. The billionaire Tony O. Elumelu or the star of the round ball Didier Drogba emphasize this fact.
“All lives whether on the African continent or elsewhere are the same and shd attract the same media attention & human sympathy ,” says Tony O. Elumelu.
But what really happened in Freetown in Sierra Leone?
3 days of torrential rain hit the capital of Sierra Leone. This rain created floods throughout the city and landslides. The mudslides mixed with the torrents of water destroyed everything in their path.
The official record is:

What are the urgent needs?

President Ernest Bai Koroma asks for help from the African Union and the international community. But, the help intervenes slowly.

The devastation was overwhelming us. “Entire communities have been wiped out,  we need urgent support now.” said Ernest Bai Koroma from the district of Regent.
The army is still deployed at the scene of the disaster and it always finds bodies here and there. We are also concerned about the women and children, the survivors, the affected communities. They are housed in temporary reception centers where we provide psychosocial support, food and medical supplies. But that is not enough, which is why we are appealing to the international community. In Sierra Leone, we went through a devastating conflict in the 1990s, we lived through the epidemic of Ebola which cost the lives of many of our compatriots, but we have never witnessed a disaster of this magnitude in one Only day. So this is very traumatic for us and we are overwhelmed. We are grateful to the countries that have given their support, but we still need a durable solution that will relocate the affected people and not only those who are affected, but also those in other risk areas, ” said the spokesman Presidency Abdulai Bayraytay
In some quarters, entire communities seem to have been swallowed up and what remains is covered with mud, “reported Abdul Nasir.