Enough is enough: Twitter users are standing up for Meghan Markle in US, Uk and France 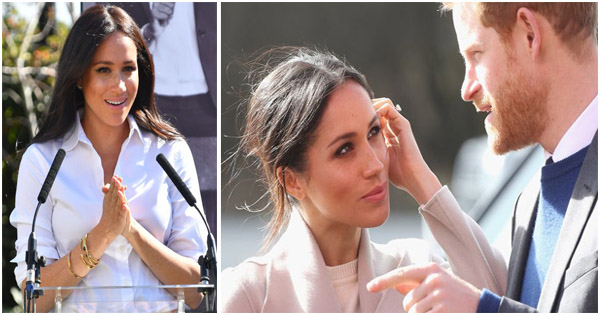 Enough is enough: Twitter users are standing up for Meghan Markle in the US, Uk and France.

Ever since Meghan Markle married Prince Harry. Her life has become very complicated. She’s a victim of harassment, racism, misogyny and sexism. These tabloids scrutinize her every move, twisting and turning them against her. Envious and malicious people are desperate to harm her.

After this fairy-tale wedding, which brought a modern twist to the royal family. The popularity of the Duke and Duchess of Sussex became a problem for some people. And many people think there’s an agenda to destroy Meghan and Harry’s reputation.

These envious and malicious people through certain tabloids attacked Meghan every day, until Prince Harry made the decision to leave the royal family to protect his wife and son.

Like angry hyenas, in complicity with racist trolls, they managed to get Meghan and Harry to leave the UK. And today, these same jealous and negative people want Meghan to have her titles taken away. Because for them, it is a crime for the Duchess of Sussex to explain to women the importance of voting.

Bullying is a crime. And those tabloids have no right to ban Meghan for having an opinion. We were all shocked when that poor woman was harassed during her pregnancy. We’re all wondering when this insanity and jealousy is finally going to stop.

Meghan and Harry deserve happiness, after all the hard times they’ve been through. Prince Harry has already lost his mother to the harassment of this tabloids. And now they’re harassing his wife Meghan. This isn’t fair. What kind of unfair world is this?

Enough is enough, in America, England and even in France, twitter users, celebrities and personalities have decided to stand up for the couple.

In England and the United States: Twitter users were outraged and horrified by Piers Morgan and Dan wootton’s unfair comments about Meghan on Saturday 22 August.

Internet users are shocked by their obsessions, harassment against this innocent woman, who just wants to live her life in peace with her husband and son.

Indeed, these journalists want Meghan’s titles taken away because she has explained to women the importance of the right to vote. In the 21st century, they want to prevent a woman from having her own opinion.

If those attacking #Meghan this morning actually WATCHED the video, they’d see she’s simply telling people to vote and take the election seriously. Yes we can all guess who she supports, but does she say it? No. Any excuse to tear her apart. #Misogynoir https://t.co/xRzTQPrw6w

Would love to occasionally see the tears and energy these morons spend on a non-working royal used on Prince Andrew’s horrendous mess. Or is there nothing worse than a woman of colour with a voice?

i don’t know who needs to hear this (i do) but meghan markle is a Black woman from the united states.

it is a fools errand to try to prevent her from being political when her entire existence is political.

However you feel about Meghan Markle (I really like her, for what it’s worth) can we all agree the amount of criticism she receives for merely existing/expressing opinions is entirely disproportionate & that this says something extremely worrying about our society/media?

It says something quite profound about scum like Piers Morgan and Dan Wootton that both are consistently and noticeably more exercised about Meghan Markle existing whilst black than they are about Prince Andrew being part of a sex-trafficking ring.

Oh do stop Piers- this obsession with spouting about Meghan Markle is getting boring…. get your mind back on things that matter, #Covid , the national Debt at £2trillion, Govt incompetence, there’s lots to go at….

piers morgan’s obsession with meghan markle is seriously unhealthy. he can’t even think properly. yes, meghan is american and she can ask people to vote if she wants to, it’s her country ffs. she didn’t tell anyone for who to vote so shut up please. focus on your royal nonce.

Riddle me this: when public figures in media and politics call for Meghan Markle to be stripped of her title for speaking out against one of the worst Presidents in US history and a menace to the world. But remain silent on the abhorrent Prince Andrew. What does that make them?

When leading public figures call for Meghan Markle to be stripped of her royal title for “impropriety” yet remain mysteriously silent on Prince Andrew it says a lot more about them than her.

There are a lot of people in the media who seem to have more problem with Meghan Markle being a person with an opinion than with Prince Andrew being an accused sex offender.

I’m 99% sure that Piers Morgan & Dan Wootton are the same people.

They’re both OBSESSED with Meghan Markle but claim that she hasn’t been mistreated by the press 👀 pic.twitter.com/G724QXbAza

The Queen openly supports Brexit which is a political agenda. Meghan urges women to vote and all hell breaks loose and man child bullies Dan Wootton and Piers Morgan wants Meghan’s title removed! I hate our press and how one sided they are. I really do hate them.😡 pic.twitter.com/DU4u1c553M

I was more or less indifferent to Meghan until I saw how the Daily Mail and the likes of Piers Morgan treated her. The brazen double standards, the inability to tolerate a woman & a person of colour with a view and a voice.

Now I know which team I am on.

Morning! Is there a way we could take Harry and Meghan back and deport Dan Wootton back to New Zealand?

Dan Wootton won’t rest until he drives another woman to suicide. He’s even taken to stalking and bullying Meghan Markle fans within the pages of the vicious Sun Newspaper. https://t.co/50OTckJKdj

Dan Wootton & what’s her face are out here blocking people but Meghan is just suppose to suck it up. 😂 https://t.co/Pki1fw2Wt7

In France: Internet users are angry and disappointed against a Zone Interdite report on M6 against Meghan.

.On August 19th, the Tv show Zone Interdite did a story on Meghan and Harry. And as usual,  story was against the Sussex couple, making them out to be the bad guys. And as far as they were concerned, it was all Meghan’s fault. Fortunately, French Internet users on Twitter expressed their anger and indignation at the injustice that Meghan & Harry suffer on a daily basis.